An update of what is happening in Beatons Wood 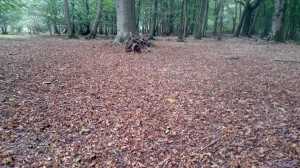 Fallen leaves are just beginning to appear on the ground in Beatons Wood marking the start of autumn, so once it gets much colder and we start having those strong and stormy winds, then the trees will quickly lose their leaves and have that stark and bare look we associate with winter. I always enjoy walking round the Wood once the majority of leaves have fallen, crunching my way through that deep layer that covers the floor of the Wood, seeing all the leaves in their different hues of orange and yellow. 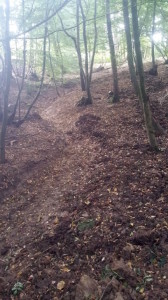 This continuing dry weather has enabled us to scoop out the silt that accumulated, due to fallen timber, in the stream that runs just below the Lower Pond thus re-establishing its normal channel (see photo). It has been an unusually long period of virtually no rain, so we were able to do this work by machine. Last year after 6 September it was impossible to even venture in our fields with a tractor without causing deep ruts, what a contrast this year! 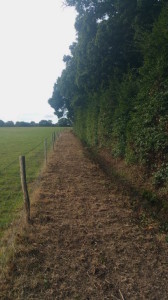 We have had the border hedge cut back (see photo) at the beginning of the month. DEFRA do not allow any farm hedges to be cut or trimmed from March to August inclusive to protect nesting birds. This has allowed us to start to properly manage the large verge we created between Beatons Wood and the adjoining grass field, by removing the bramble, nettles and bracken that have dominated this area. We have cultivated it so we have been able for the first time to reseed it with a mixture of herbs, wild flowers and grasses, which include Alfalfa, Trefoil, Sanfoin, Sheeps Burnet, Lucerne, Chicory, Timothy, Yellow Rattle, Plantain and Oxeye Daisy. It is just beginning to germinate and if we do not have too much rabbit damage you will be able to view it from the Redor Yellow Walks. 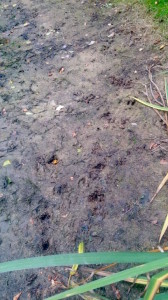 We seem to be having an increasing number of deer as can be seen by their footprints by the Lower Pond (see photo). It is worrying to see that they are eating the tips of the new shoots appearing from the stumps of old hornbeam trees, that were coppiced in January. They are rarely seen other than at dawn and dusk, but we might have to consider erecting deer fencing around the perimeter of Beatons Wood if the damage to the emerging coppice and newly planted trees gets too bad, quite an expensive option! The two wire enclosures we erected in 2010 show the dramatic contrast of growth when fenced against rabbits and deer (see photo below). It appears so dense that it leaves little room for the bluebells and wood anemones! 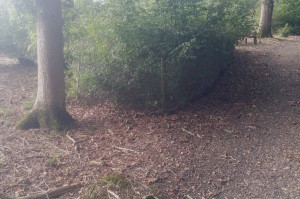 This fenced off area in 2010 shows how the young trees grow if not eaten by deer and rabbits, but then the bluebells would not look so spectacular!

When I was much younger I can remember Beatons Wood being carpeted in primroses, which appeared before the white wood anemones and bluebells, but sad to relate that in my first years of farming at Bates Green I made a management decision that meant virtually all the primroses disappeared. Many years before the Bluebell Walk was ever thought about, Beatons Wood was rarely visited by anyone so it appeared to be 23 acres ‘not earning its keep’. I thought this would be an ideal area to winter our rams and allow them to forage amongst the brambles and weed grasses, little realizing that the early primrose leaves were also tasty. And once the leaves were eaten the plants quickly died. I have always deeply regretted their loss and felt ashamed of what I inflicted on Beatons Wood. Three years ago a great friend of the late Monica Cornish, whose idea it was to have a Plant Stall in aid of Arlington Church at the Bluebell Walk, had a surplus of primroses growing wild in her field. She offered a large number of plants to us in memory of Monica. These we planted by the Lower Pond in an area facing South, which already supported a few of the original plants. We found the rabbits knew which ones were freshly planted and would dig around them, so to protect them we have now erected a wire fence (see photo), which we will remove once the Walk opens next year and just hope they start to propagate themselves.

My aim is for it to be posted on the website on Friday 28 October.

This message was added on Friday 30th September 2016