General History of the Bluebell Walk

In 1972 Park Mead, our local Primary School, was fundraising for an outside swimming pool and the late Carolyn McCutchan who was a Parent Governor suggested the opening of Beatons Wood for a single weekend for parents and friends. The response from those first visitors who saw the profusion of bluebells, was so overwhelming, that we had to open the following year and so it continued year on year. We liaised with our neighbours at Park Wood and Primrose Farm, extended the walks over their land to incorporate the Farm Trail element. We were indebted to the East Sussex County Council, who under their innovative scheme of encouraging farmers to open their farms to the public, provided expertise and support during the first eight years in developing the walks and supply of refreshments and countryside information.

We formed a committee representing local interests to manage the finances. The principle we defined was ‘to allow the public to view and learn about nature and farming methods, whilst raising money for local needs’. Within 10 years we had over 58,000 visitors and raised £17,000 of which £6,000 went towards the purchase of the Glebe Field, which was needed to enable the new Village Hall to be built. Other monies went towards the maintenance of the existing First World War Village Hut, Park Mead School, and our historic Village Church of St Pancras.

In 1981 Bates Green Farm was the national winner of the ‘Country Life’ Farming & Wildlife Silver Lapwing Award for Conservation, which was a major accolade, recognizing also that very few farmers then were encouraging the public to visit working farms.

In 1984 we focused on raising money towards the proposed new Arlington Village Hall. A model was made, then put on display each year, until the building was erected in 1988. In recognition of the fact that the Bluebell Walk raised about a third of its cost, two bunches of bluebells are depicted on the main Village Hall sign.

Looking back over the old minutes one notes that entrance charges for adults was 20p, children 5p, with ice creams 9p; and tea and biscuits 10p! To raise funds we supplied ‘dig your own manure’ at 15p per bag from the large pile at the back of the farm. We used to hold an annual Barn Dance after closing the Bluebell Walk. To obtain ideas for cards to sell we had an annual photographic competition. The East Sussex County Council for some years provided us with a mobile classroom. We had a teacher’s pack on farm activities and what one should see on the Walks, but too many schools participated which caused concern to the general public who expected peace and tranquility, and the scheme was therefore dropped.

Ideas from the visitors book included a request for leaflets which we resisted until 1984, thinking it would increase litter! Visitor numbers fluctuated according to the weather at weekends, as happens now, but not to the same degree. In 1980 we had 13,300 visitors and 1981 4,671! There has been a significant change in the weather pattern, as up to 1988 we never ever opened during the month of April as it was strictly a May event.

We generated much publicity as it was then an innovative idea, which has since been emulated at other sites in Sussex. Tony Penrose who lives locally produced a feature film of fourteen minutes that was released on the film circuit and even went abroad. I had many letters from Australia and New Zealand, mainly from ex-patriots who after seeing it felt homesick. We did have the occasional slot on TV, the first being in 1978 and even a mention in the Readers Digest!

In 1987 when the hurricane struck, the damage to Beatons Wood was immense, and thus we opened the ‘Bluebell Wood Hurricane Appeal’ to raise the £25,000 needed for the costs of clearance. This coincided with a downturn in farming income, mainly due to the surpluses from the EEC. We had to dramatically reduce our labour force, cut back on our farming activities including the well known Arlington Turkey Farm Shop, which is now closed.

On the 10th March 1988 it was formally agreed that the assets should be distributed, between the Church, Village Hall & Hurricane Appeal, the committee wound up, with the future management left in my hands.

Since then, the practice of helping local Charitable Organizations has continued and they are the major factor in it’s success. We endeavour with our farming neighbours to enhance and upgrade the facilities of the Walks, whilst encouraging the public to enjoy our lovely countryside, and ancient woodland of which we are the fortunate custodians.

The story of Primrose and Parkwood Farms

The Appleton family have farmed at Primrose Farm since 1947 following a move from their small mixed farm in Nottinghamshire. Allan (now in his 90`s) and his parents Robin and Connie took the decision to move in search of better land – Connie’s contribution was that she would like to be closer to the sea. The purchase of Primrose Farm was completed and the Appleton`s moved their animals and equipment on a specially chartered train to Berwick station. Allan comments that they had seen the quality of the grass that their neighbours (the McCutchans) could grow and the dairy herd at Primrose began!

In the mid 1970`s Allan`s son Peter returned to the farm and when neighbouring Parkwood Farm came in to the market, the family purchased it.  At this time, there were dairy herds at both farms, but as quotas took hold, the two herds were amalgamated and the dairy unit at Parkwood grew, leaving Primrose Farm as the young stock unit and stables.

Since the early days, the Appleton`s have been consistent winners of various farming awards.

Grass and forage maize are the farms main crops, providing high quality feed for the 450 cow dairy herd and 250 young stock throughout the winter. During the Spring, Summer and Autumn, cattle graze the fields in a carefully planned rota to ensure best possible use of the grass. Their milk is sold through Arla and the Tesco Sustainable Dairy Group to be pasteurised for liquid supply through your local Tesco.

Peter’s son Chris has now joined the business moving it into a fourth generation.

Rented with Bates Green Farm by Stanley Ross McCutchan from the Michelham Priory Estate in 1921, after he moved back from Canada, having been wounded in the First World War whilst fighting with the Canadian forces, eventually bought in 1925.

I remember Abbots Wood when owned by Duke of Devonshire used to be like Beatons Wood, with bluebells as far as the eye could see. The Forestry Commission purchased it in the 1950’s, then clear felled it and planted swathes of confers!

On the south edge of the wood there remains a bank called a ‘pale’, on which a fence or hedge was grown to mark the boundary of the medieval deer park belonging to Michelham Priory

Before the Second World War my father used to coppice an acre a year for firewood, then some coppicing was restarted in the 1970’s which we continue to do periodically

After the War and regulations were relaxed my father sold 100 of the largest oaks, the loss of these large canopies encouraged the growth of brambles and wild raspberries, which we have now removed to emphasise the vistas of bluebells

As a child I loved seeing the wild strawberries, violets and masses of primroses which we are now trying to encourage back

A deciduous wood is ever changing, as years ago few holly trees grew, but in the last two decades they increased so much we have had to remove many, as their shade killed bluebells and appears to sterilize the soil under their canopy

Climate change has had a dramatic influence on the bluebells, as when we first opened in 1972 and asked the best time to see the bluebells, it was the last three weeks of May!

Bates Green Farm & its Association With the McCutchan Family

Bates Green Farm, a small gamekeepers cottage plus a few pheasant rearing buildings, 33 acres of pasture with the 23 acre Beatons Wood bought at auction in 1925 for £900, when the Michelham Priory Estate was split up

In 1935 my father Stanley Ross McCutchan met my mother Gilberte who was born in France, at a party at Michelham Priory when it was owned by the Wrights soap family

They married in 1936, I was born at the end of the year, my brother Henry in 1939 and our sister Mary in 1944, who then was tragically killed in a road accident in 1974 with her six month old twins

My brother and I took over Bates Green Farm in 1959 farming sheep, beef cattle, turkeys and corn, then he left in 1967 to work with his father in law

I then started Arlington Turkeys supplying turkeys and turkey portions throughout the year around the local locality, until 1990 when cheap Italian imports of turkeys made the business uneconomic

Sheep grazing utilized the 110 acres of grassland, until I personally gave up keeping sheep in 2015, so the ground is now rented out.

It was Carolyn McCutchan, who died in December 2019, who first came up with the idea of opening Beatons Wood to the public in 1972 when the bluebells were flowering, then I added it to my farm business as a diversification project. In 2015 the Bluebell Walk Partnership was formed with my daughter Philippa Vine and husband Michael but in 2020 replaced by the Bluebell Walk Advisory Group (BWAG), formed with 9 members, chaired by our Accountant, to ensure that what was started in 1972 progresses and develops into the future, with the invaluable assistance of local charities.

Some of our past achievements... 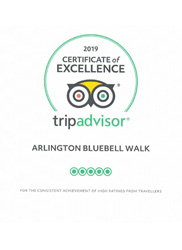 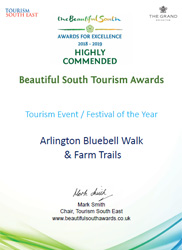 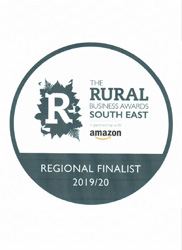 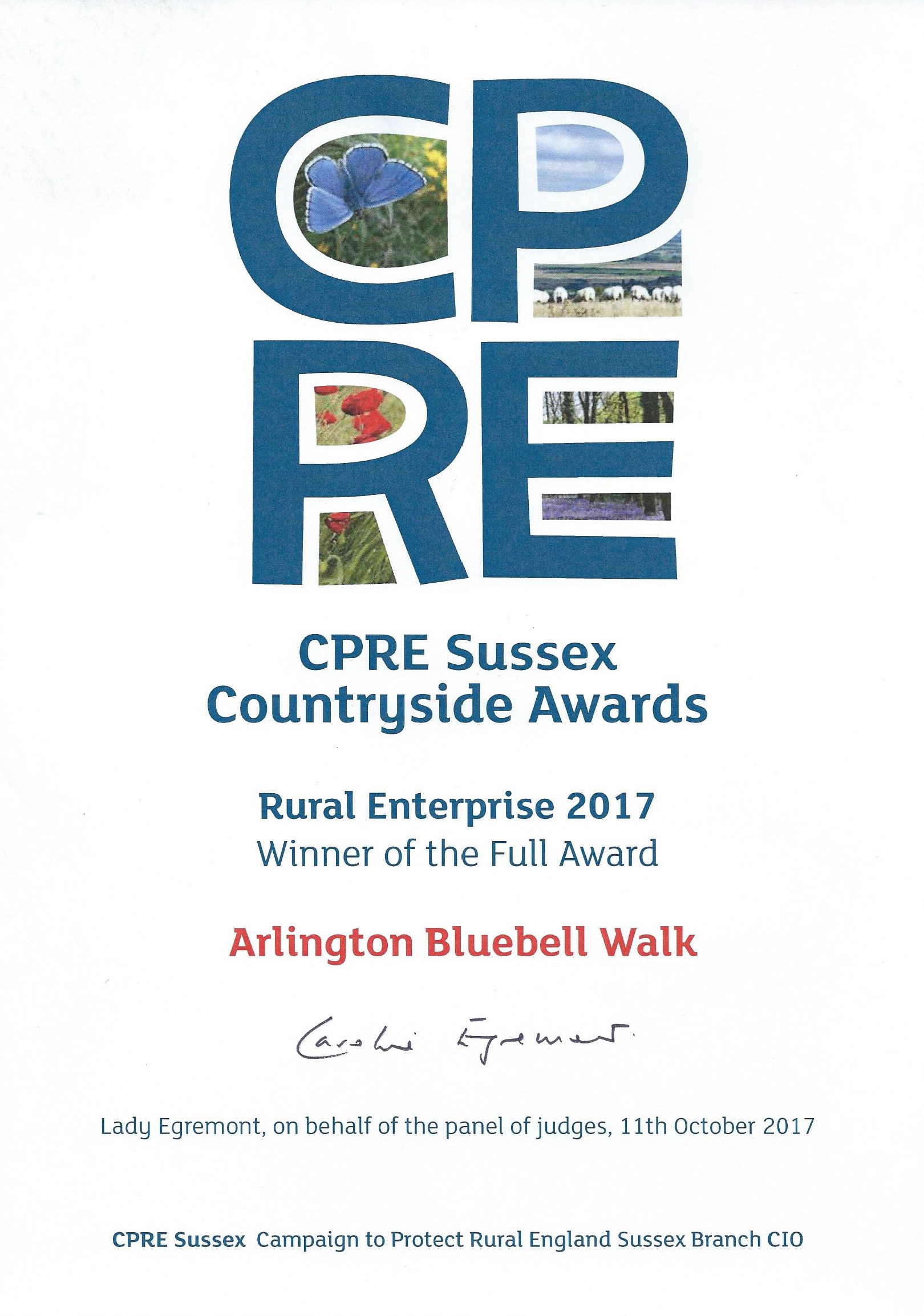 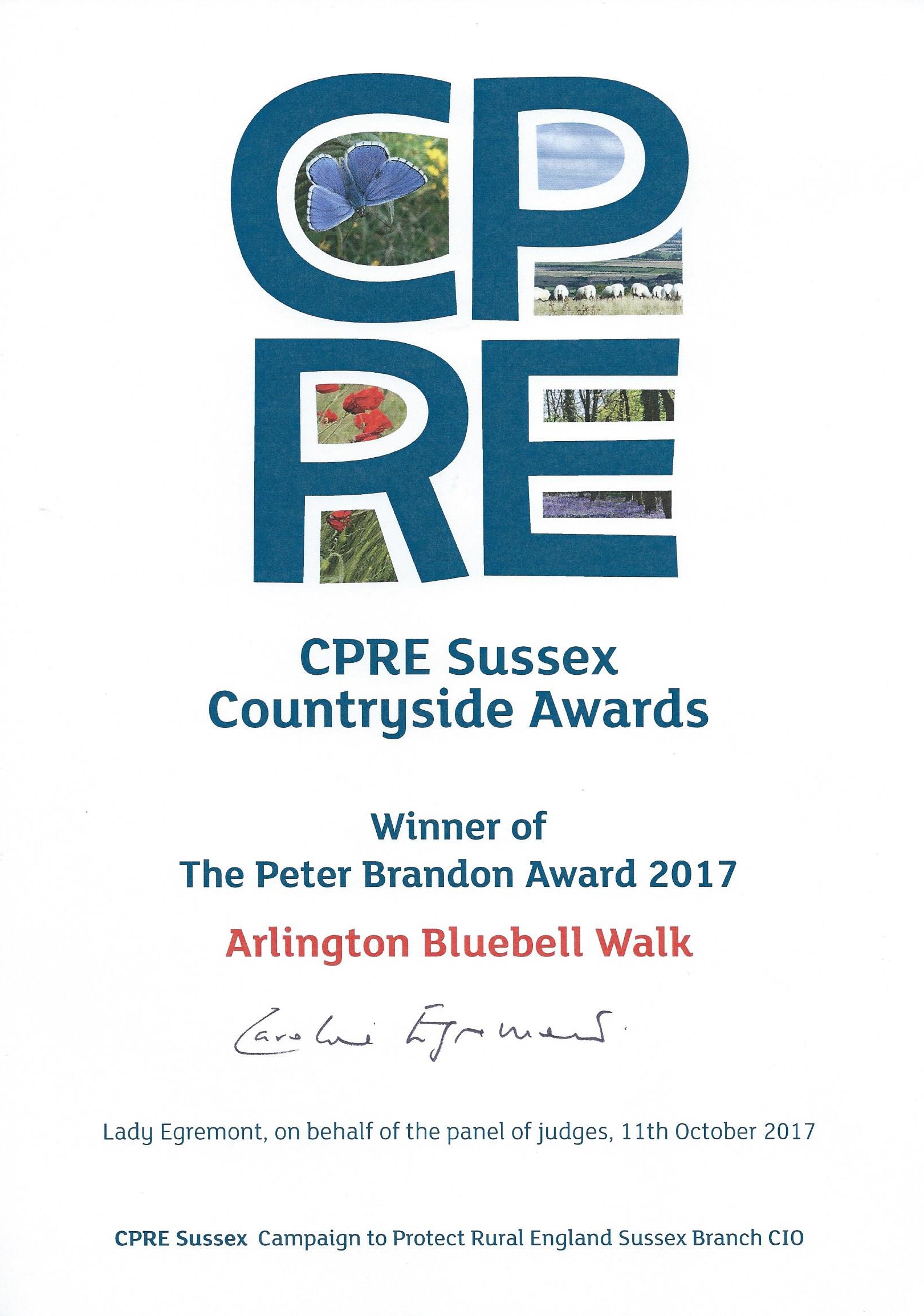 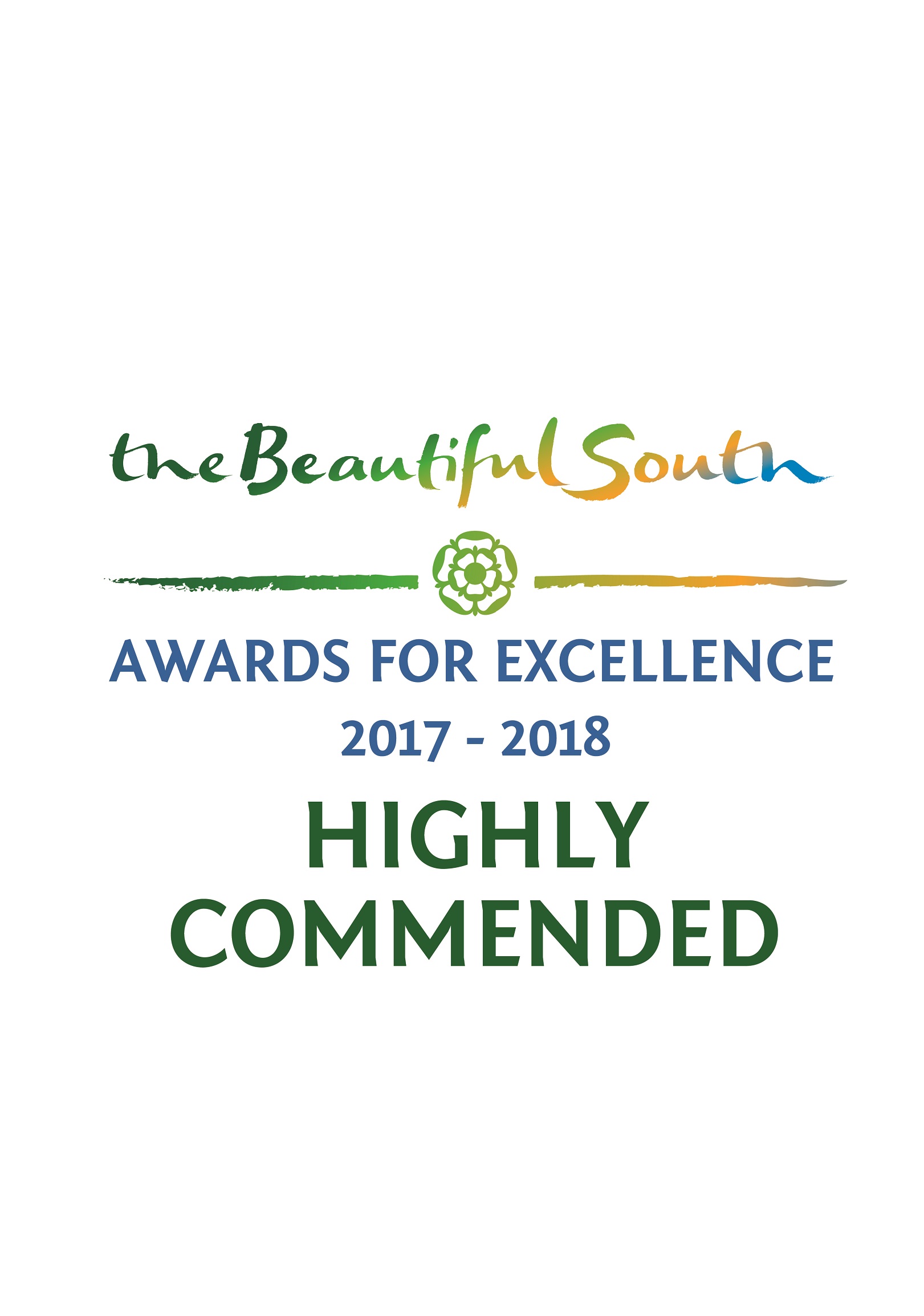 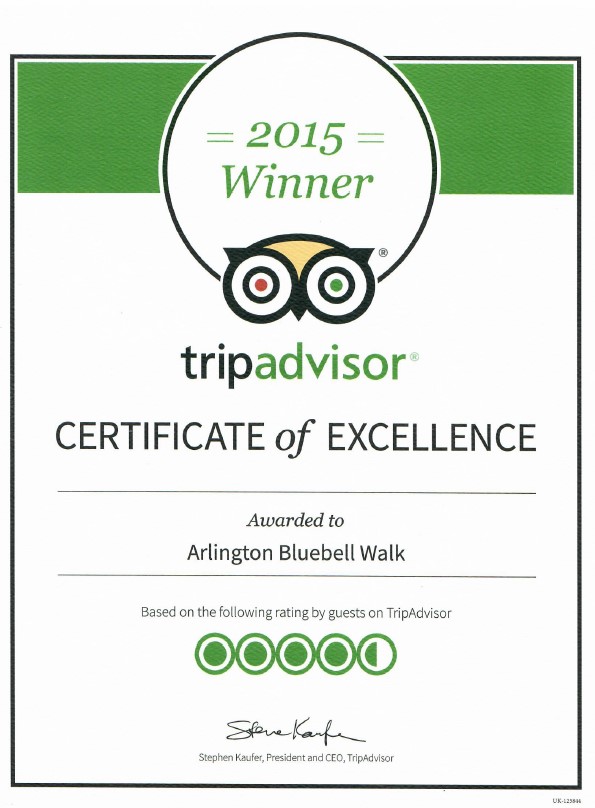