Trying to improve the bluebell for next year

Trying to improve the bluebell for next year

Beatons Wood is like a garden. Something is always growing, especially in this wet June! Last year we actively started practical management to maintain the bluebells and white wood anemones by removing the brambles around the Blue Walk and this greatly improved the vistas of blue throughout the wood. The positive result has encouraged us to do more now that this year’s Walk is over. 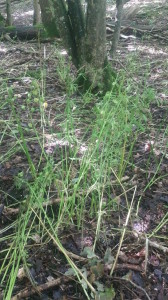 What we consider detrimental to the bluebells are mainly cleavers with their long sticky tendrils, which were first noticed a few years ago in the north west corner of the wood. These are now found in other areas so we have started to take action. They are annuals which germinate alongside the bluebells but are prominent once the bluebells finish flowering and, in the bad areas, form a dense mass twisting amongst the bluebell seed heads. They are relatively easy to pull up but so numerous that it is only in small areas that we have been able to remove them before their seeds ripened and started to drop off. This means that plenty will germinate next year, so we will make an extra effort, when the 2017 Bluebell Walk closes, to start working early to try and clear more areas. Hand pulling is the only option, there being no spray that could be effective without any risk to the bluebells. Anyway, we have an aversion to using sprays in our wood on principle, due to unknown damage that could be caused to the many invertebrates that thrive in the soil.

Bracken is still present in four areas of the wood but slowly diminishing as, once the fronds appear to be fully out, we pull them up. This weakens the underground rhizomes and we will eventually win. But it is time consuming! 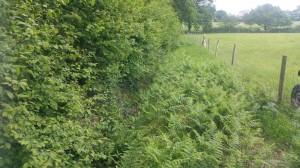 Bracken growing on the edge of the wood 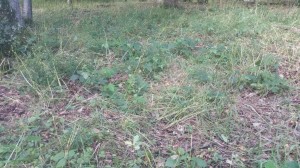 We notice weed grasses have slowly spread into the wood from the surrounding fields but currently only in the areas close to the wood edge. Work in removing them, again by hand digging, is being done this year, hopefully before more seed is distributed.

Finally some new bramble shoots are appearing, being the legacy from the vast amount of brambles removed last year. We are being quite ruthless in pulling them up, hoping that by June 2017 they will have finally disappeared in those areas of Beatons Wood that we have designated as being ‘bramble free’! 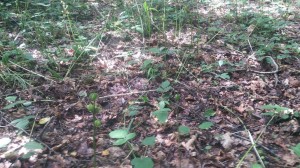 This message was added on Friday 1st July 2016